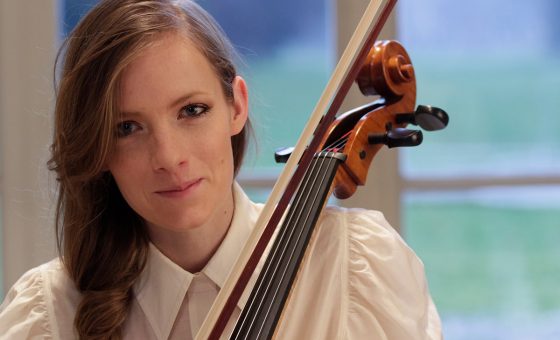 Naomi Berrill is an Irish cellist and singer currently based in Florence.

In 2005 she made her debut as solo cellist with the Royal Scottish Academy Orchestra with three performances of Tchaikovsky’s Rococo Variations for Cello and Orchestra. Upon graduating, Naomi continued her studies in Italy with Enrico Bronzi and Francesco Dillon, and then in Basel for chamber music with Rainer Schmidt. She has also undertaken masterclasses with Johannes Goritzki, Valter Despalj and Mstislav Rostropovich.

Following her classical studies Naomi has worked on original compositions for solo cello and voice. She has collaborated with cellists Mario Brunello and Giovanni Sollima, the Irish ‘Crash Ensemble’ ,The New York City Ballet, and choreographer Virgilio Sieni, director of Biennale Danza in Venice.

Naomi released her first album of arrangements for voice and cello ‘From the Ground’ in January 2015.

Her second album ’To The Sky’ followed, being presented at the Uffizi Gallery in Florence.

Naomi’s most recent album ‘Suite Dreams’ (Casa Musicale Sonzogno/ Warner Italy), is a collection of original songs and melodies with the central theme of Migration.

She is artistic director of the ‘High Notes’ festival, founded in 2009, which takes place each year in the Apuane Alps.