Carnival of the Animals & the Education Outreach Programme 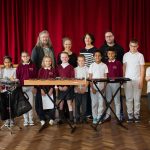 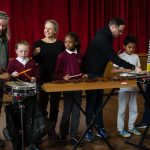 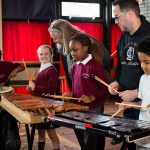 Baboró International Arts Festival for Children and Music for Galway are joining forces for the first time to produce a very special classical music event; the presentation of the iconic Carnival of the Animals, composed by French composer Saint-Saëns. A co-production between the two organisations, the performance will be part of this year’s Baboró festival and Music for Galway’s 39th season, which both start next week.

One of the most popular pieces of classical music ever composed, Carnival of the Animals contains tuneful and accessible music that provides the perfect platform to introduce young audiences to a number of instruments. With each of the music’s 14 movements representing a different animal there’s a chance to chuckle at the clumsy sounds of the elephant, wonder at the tinkling tunes of the sea and admire the elegant notes of the swan. The lion, donkey, rooster, kangaroo and tortoise also feature. Overall the musical suite is beautiful, funny, and clever all at once.

Performed by Dublin-based chamber music group Ficino Ensemble, their concerts have been described as exciting and intimate with a high calibre of ensemble playing. The musical staging will be enhanced by new child-friendly texts written by Helen Gregg, a well-known actor who regularly performs with Branar and Macnas. Marc MacLochlainn, artistic director of Branar, directs. In addition to school performances, there is a special family show on Tuesday 15 October at 7pm. Suitable for ages 5+, the evening show will see the Ficino Ensemble move from animals to fish when they perform Schubert’s Trout Quintet in the second half.

As part of the project, Baboró and Music for Galway are working in partnership with Maoin Ceoil na Gaillimhe, on an accompanying education outreach programme. Maoin Cheoil na Gaillimhe (MCnG) is a dedicated school of music serving over 1,000 children in Galway city and county. Over the past 5-weeks, MCnG has delivered a cross-curriculum Carnival of the Animals education pack to the children of 12 nationals schools in Galway city and county. Developed by Hugh Kelly of Adventures in Music and MCnG, the educational material is reinforced by a series of interactive workshops where the staff of MCnG help children to connect to the Carnival of Animals production through a playful demonstration and conversation about the instruments in the show. Commenting on the programme Hugh Kelly says, “The response from each of the schools involved has been exceptional . It is beautiful to see young children captured by the spell of Saint-Saëns’ music and bringing an energy and enthusiasm to each of the workshops.”

Aislinn ÓhEocha, Executive Artistic Director of Baboró said: “We are delighted to be collaborating with Music for Galway on this wonderful event. Children and families can look forward to a very special performance of Carnival of the Animals during this year’s Baboró festival. With the addition of Maoin Ceoil na Gaillimhe’s outreach programme, children in Galway are enjoying an expert introduction to the musical instruments they’ll see on stage during the show.”

Anna Lardi Fogarty, executive director of Music for Galway, commented: “We have been looking for many years for the right project to present with Baboró. When our artistic director Finghin Collins took part in a performance of this work a few years ago, we knew we had the right fit. It has been especially exciting to work on the school outreach aspect together with Adventures in Music. We would like to thank the Arts Council and SAP for supporting this event.”