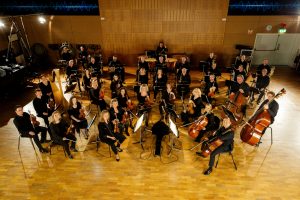 Introducing orchestral music to new audiences since 1948, the RTÉ Concert Orchestra has built a strong connection with the public that saw it voted the World’s Favourite Orchestra 2015.

Opera, ballet and choral performances include collaborations with Irish National Opera, English National Ballet and Our Lady’s Choral Society. Film screenings with live score include the Lord of the Rings trilogy, the world première of Vertigo, the European première of An American in Paris and the Irish première of Jaws in Concert.

The RTÉ CO has appeared as the ‘house orchestra’ on RTÉ TV’s The Late Late Show, it featured on Dancing with the Stars in February 2019, in the spectacular Centenary concert in 2016 as well as in Instrumental and The High Hopes Choir. The recently launched Strings Attached sessions feature a range of top talent – ranging from Villagers to Zoë Conway – invited to collaborate with the RTÉ CO for programmes broadcast on Bank Holiday Mondays on RTÉ Radio 1.