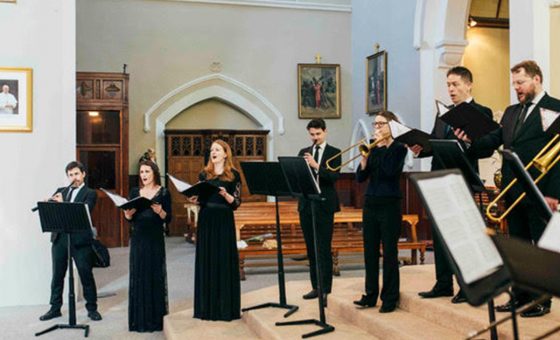 Resurgam is Ireland’s leading project- based professional choir. Founded in 2003 by Mark Duley, it has earned for itself a respected place amongst the country’s premiere ensembles. Resurgam has worked with an international array of conductors including Monica Huggett, Christophe Rousset, Erin Headley and John Butt, and has performed in the UK and continental Europe, including an acclaimed appearance at the Bach Festival of Lausanne. Within Ireland, it has appeared at most of the major international festivals, including Galway International Arts Festival, Kilkenny Arts Festival, Ardee Baroque Festival, Cork International Choral Festival, Galway Early Music Festival, and the Pipeworks Festival. It has given many groundbreaking performances of music from the Renaissance and Baroque periods.

Resurgam’s unique work in the field of early vocal music in Ireland, especially through the acclaimed single-composer retrospectives the choir has undertaken (including Giovanni Gabrieli, Heinrich Schütz and Orlandus Lassus) has been enhanced through recent collaborations with the English Cornett and Sackbut Ensemble. In addition, Resurgam has also brought to Irish audiences the great choral works of the Russian Orthodox tradition, touring the country with Rachmaninov’s All Night Vigil and Liturgy of St John Chrysostom, and giving the first complete Irish performance of Schnittke’s monumental Concerto for Choir.