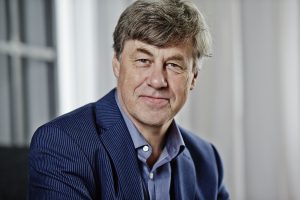 Paul Hillier is from Dorset in England and studied at the Guildhall School of Music and Drama in London. His career has embraced singing, conducting, and writing about music. Earlier in his career he was founding director of the Hilliard Ensemble, and subsequently founded Theatre of Voices.

He has taught in the USA at the University of California campuses at Santa Cruz and Davis, and from 1996-2003 was Director of the Early Music Institute at Indiana University. He was Principal Conductor of the Estonian Philharmonic Chamber Choir (2001-2007) and has been Chief Conductor of Ars Nova Copenhagen since 2003.

His recordings, over a hundred CDs including seven solo recitals, have earned worldwide acclaim and won numerous prizes. His books about Arvo Pärt and Steve Reich, together with numerous anthologies of choral music, are published by Oxford University Press.

In 2006 he was awarded an OBE for services to choral music. In 2007 he received the Order of the White Star of Estonia, and was awarded a Grammy for Best Choral Recording. In 2008 he took up the position of Artistic Director and Chief Conductor of the National Chamber Choir of Ireland (now Chamber Choir Ireland), and in 2009 was invited to form the new Coro Casa da Musica in Porto, Portugal. In 2010 he won a second Grammy (this time in the small ensemble category), for Theatre of Voices’ recording of David Lang’s The Little Match Girl Passion (which also won a Pulitzer Prize), together with a selection of choral works by Lang, sung by Ars Nova Copenhagen.