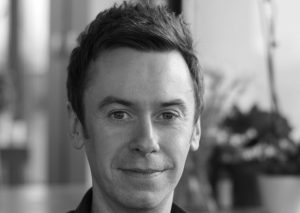 Ed Bennett’s music has been described in the press as ‘anarchic’ (Irish Times), ‘stunningly intense’ (the Quietus) and ‘thrilling’ (Gramophone) is often characterized by its strong rhythmic energy, extreme contrasts and the combination of acoustic, electronic and multimedia elements; it was described in The Guardian as ‘unclassifiable, raw-nerve music of huge energy and imagination’ and by Sinfini Music as ‘one of the most scintillating voices to emerge of late from the British Isles.’ His body of work includes large-scale orchestral works, ensemble pieces, solo works, electronic music, opera, installations and works for dance and film.

He performs with and directs his own ensemble, Decibel, which is dedicated to the performance of new and experimental work and with whom he has released three critically acclaimed CDs of his music. Dzama Stories (Quartz Music) was described as ‘a glorious addition to the contemporary canon…I haven’t heard a disc of Irish Composition as vital and as urgent as this in a long while’ (Musical Criticism, 5/5 stars) and My Broken Machines (NMC) was Chicago Time Out’s No.1 Contemporary CD of 2011. His recent release ‘Togetherness’ (2018) was described in a 5 star review in Classical Music Magazine as ‘high-octane music that demands the listeners attention.’

In 2012 Ed Bennett was awarded the prestigious Philip Leverhulme Prize for the Performing Arts and was recently awarded the Arts Council of Northern Ireland’s Major Individual Artist Award, the highest honour awarded to an artist from the region.